To share your memory on the wall of Scott Knight, sign in using one of the following options:

Scott served as an inspiration and leader to so many friends and brother Marines. He was also a music lover. Surely, he is drumming in heaven with his band brothers that have passed before him. Hopefully he is speeding in his Mustang-GT. May it always be Super Movie Tuesday and may the Mellow Yellow runneth over. Until we meet again you are forever loved.

A memorial service will be held once limits on size of gatherings are lifted. In lieu of flowers donations in Mr. Scott's name can be directed to the Mount Saint Joseph Wrestling or Football Teams, 4403 Frederick Ave, Baltimore, MD 21229 the Lansdowne Gators or Arbutus Golden Eagles, P.O BOX 7343, Arbutus, Maryland 21227 .
Read Less

Print
Services will be held at a later date.

We encourage you to share your most beloved memories of Scott here, so that the family and other loved ones can always see it. You can upload cherished photographs, or share your favorite stories, and can even comment on those shared by others.

Posted Mar 28, 2020 at 05:52pm
Love never dies. It does not go away in the parting of people. Love lives on in the heart, as You have and Will in the Strength of this Tree.

Posted Mar 26, 2020 at 03:43pm
Dear Amy and Family,
I am so sorry to hear of Scott's passing. I served with Scott in Kilo Co 3/1, he was a great leader and also a good friend during our time in the Corps. When troop moral was down, Scottie always had us cracking up and made our time in the Marines more enjoyable. My thoughts and prayers are with you and your family.

Posted Mar 26, 2020 at 10:44am
I grew up with 2 older brothers John and Scott, they were always there to bail me out of whatever stupid thing I did on whatever day I was stupid, which was a lot! Words cannot begin to describe the loss and cannot even begin to imagine how Amy and the boys feel. Scott Knight was one that cannot be replaced and I will miss him every single day! Scott was a honorable man who served his country and was a man you could truly count on when it mattered! Scott loved his wife Amy more than life itself and she him, his boys have been raised by a true leader which will carry them throughout life, Scott did his job and did it with the up most honor and discipline, I know he is looking upon us with that amazing smile and of course his one liners, come on back!!! May the Lord our God bless him and his family always.

Posted Mar 25, 2020 at 11:11pm
This guy was my brother forever. I love you bro. You truly knew how to bring a smile to anyone. Til we meet again on your grounds. You are the best.
Comment Share
Share via: 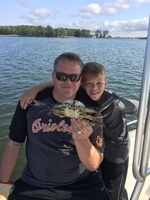