To share your memory on the wall of Nicoleta Paltineanu, sign in using one of the following options:

Provide comfort for the family of Nicoleta Paltineanu with a meaningful gesture of sympathy.

Print
Nicoleta Paltineanu passed away on the evening of December 28, 2019, at the Gilchrist Hospice in Columbia, Maryland, in the company of her son, Ioan, daughter in law, Kasey, and grandchild, Kip. She was 66.

Nicoleta was born on May 17, ... Read More
Nicoleta Paltineanu passed away on the evening of December 28, 2019, at the Gilchrist Hospice in Columbia, Maryland, in the company of her son, Ioan, daughter in law, Kasey, and grandchild, Kip. She was 66.

Nicoleta was born on May 17, 1953 in Bucharest, Romania, to young parents, Margareta and Vasile, who were 27 and 26 years old. Nicoleta’s ancestors originated in what is today known as Northern Macedonia. They were Aromanians from Krushevo, Bulgaria, Romania and Moldova, with strong Christian Orthodox traditions, which she carried on throughout her life. At the age of five, Nicoleta lost her father, and she was raised by her mother who never remarried.

Nicoleta went straight to work after high school as an export specialist for Electro Export Import based in Bucharest. Next, she held economist positions at the Industrial Electronic Manufactory, the National Institute of Research and Development for Land Reclamation, and the Agricultural Bank S.A. She obtained dual degrees in finance and accounting, graduating from the Bucharest Academy of Economic Studies.

Nicoleta and Ioan Caton Paltineanu married in December 1984. She helped raise Liviu, Ioan’s son from a prior marriage. In 1986, they welcomed Ioan Jr. Her husband’s work gave the family the opportunity to move to America in 1993 on a visiting scientist visa. Nicoleta worked her way back into her field for several years, along with learning English, until she obtained an accounting position in 1998 at Rehabilitation Opportunities Inc. To say that she loved her work and loved the company she was with was an understatement. She become the company’s Controller and worked there for twenty years until her retirement in 2018.

Nicoleta will always be remembered as a wonderful mother. She pushed Ioan to do well in school, tutoring him in math, which she knew well. Her parenting culminated in Ioan getting accepted into George Washington University and receiving several academic grants. Nicoleta began working three jobs during Ioan’s time at GW. Her mother paid for her schooling and Nicoleta wanted to do the same for her son.

In 2017 Nicole started her battle with cancer. Regardless of her diagnosis, she continued living her life the way she wanted. She passed away in the hands of her son and daughter in law, while her favorite ABBA song played, Andante, Andante.

The wake will take place on Friday, January 10 from 4:00 pm to 8:00 pm at the Orthodox Church of Saint Matthew, located at 7271 Eden Brook Drive, Columbia, Maryland. A Parastas, a Christian Orthodox memorial, will take place at 7:30 pm that evening at the church.

The funeral service will be held on Saturday, January 11 at 9:30 am, at the Orthodox Church of Saint Matthew. The burial will take place at The George Washington Cemetery, located at 9500 Riggs Road, Adelphi, Maryland.

A repast will be held at the church after the burial.
Read Less

We encourage you to share your most beloved memories of Nicoleta here, so that the family and other loved ones can always see it. You can upload cherished photographs, or share your favorite stories, and can even comment on those shared by others.

Plant a Tree in Memory of Nicoleta
Plant a tree 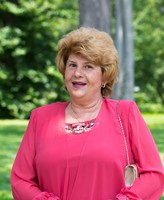