To share your memory on the wall of Nicholas DeClaris, sign in using one of the following options:

Born in Greece in 1931, he lived under and resisted Nazi occupation in Greece. He came to the United States after... Read More
Dr. Nicholas DeClaris, ScD. died peacefully on March 28, 2020 of a blood-borne bacterial infection, he was 89 years old.

Born in Greece in 1931, he lived under and resisted Nazi occupation in Greece. He came to the United States after World War II and arrived in Texas. Initially working in an uncle’s restaurant, he started tertiary education at Kilgore College, but then transferred to Texas A&M where he graduated with a bachelor’s degree and earned a Jesse Jones Award for Achievement. Upon finishing Texas, A&M, which he loved very much, he went to The Massachusetts Institute of Technology (MIT) and studied under Prof. Ernst Guilleman and earned a Science Doctorate (ScD). During that time in the 1950s, because of his strong talent in mathematics, his first notable achievement was a proof that changed electrical engineering and component design. In 1950s, when electrical components were either vacuum tubes, resistors, capacitors and inductors, the ruling principle was that for every capacitor, there had to be an inductor because of the complex fields, which was an expensive device. Dr. DeClaris worked out a solution that eliminated the need for inductors, and published it in a paper that prompted a quick call from the then head of Bell Labs advising him not to give away a million-dollar idea like that.

It was also during that time that he started a small venture called ResCon with a lawyer friend Ralph Margolis. Other notable friends and colleagues included Dr. Rudolf Kalman, Dr. Amar Bose, Dr. Ed David, and Dr. Norbert Weiner. He also took a turn at the dance floor and briefly was an Arthur Murray dance student and then instructor.

When graduated from MIT, his first professional position was as a young professor at Cornell University. He became friends with Dr. Henry Booker and during this time he wrote or edited many articles and books. His time at Cornell University saw collaborations with Dr. Frank Rosenblatt, inventor of the Perceptron which was an early form of Artificial Intelligence and Dr. Dale Corson, who developed the Arecibo station in Puerto Rico. By the time he left Cornell 1967, he held the Cornell Aeronautical Chair.

The transfer from Cornell University to the University of Maryland at College Park came by way of recruitment from Dr. Wilson Elkins to become the Head of The Electrical Engineering Department in the College of Engineering at College Park. Dr. DeClaris headed that department through the mid-1970s. While he had many successful students, one notable student was Dr. Judith Resnick who tragically perished in the shuttle accident. In the area of research, he focused on Systems Theory and Systems Science. It was also during the 1970s that Dr. DeClaris and his good friend Dr. Robert Newcomb, negotiated one of the first academic exchange programs with Poland between the Politechnika Gdańska and the University of Maryland.

In the late 1970s and through the 1980s, as he continued his professorship at College Park, Dr. DeClaris worked with Dr. RA Cowley, in his efforts to build Shock Trauma in Baltimore, Maryland. He officially took the role of Associate Director at Shock Trauma and there he and Cowley advanced protocols and procedures for Maryland Institute for Emergency Medical Services Systems. He also developed a strong friendship with notable professor and pathologist, Dr. Ben Trump. Continuing to work hard, he expanded his research into medicine and pathology after stepping down as Associate Director of Shock Trauma.

It was in the latter half of the 1980s that Dr. DeClaris took on a part-time role at the National Science Foundation (NSF) where he worked with the notable Dr. Joe Bordogna. It was at NSF that Dr. DeClaris advanced an initiative that was later signed by President Ronald Reagan creating an Emerging Technologies Program.

It was during this decades of the 1980s and 1990s that Dr. DeClaris continued to teach at the University of Maryland at College Park and at the University of Maryland Medical School in Baltimore. Merging engineering principles and medical science, he developed practices and procedures that would later be called informatics and biomedical engineering. His sphere of collaborators during this time included the distinguished and urbane Dr. Don King where they both did work at the Walter Reed Armed Forces Institute of Pathology and at the National Library of Medicine.

Though a Greek Orthodox, he wished for no funeral services and his ashes will be interned at the family crypt in Greece after the Covid 19 pandemic abated.
Read Less

To plant a memorial tree in honor of Nicholas DeClaris, please visit our Heartfelt Sympathies Store.

Receive notifications about information and event scheduling for Nicholas

There are no events scheduled. You can still show your support by sending flowers directly to the family, or planting a memorial tree in memory of Nicholas DeClaris.
Plant a Tree

We encourage you to share your most beloved memories of Nicholas here, so that the family and other loved ones can always see it. You can upload cherished photographs, or share your favorite stories, and can even comment on those shared by others. 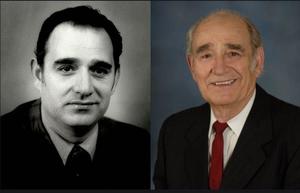