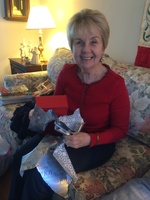 Maria was born on May 21st 1945 in Gloucester, England to Stephen T. Hayes and Doris Edna Hayes (née Stone). Her parents met because her father, who was a sergeant in the United States Army, had been stationed in southwest England as part of the war effort and her mother was a resident of the local area. Shortly after World War II ended, Stephen brought his new wife and daughter to his hometown of Baltimore, Maryland. Maria and her mother made the transatlantic crossing in 1946 on a converted troop transport, the Queen Mary.
Maria grew up in the Arbutus area and was a member of the first graduating class from Woodlawn High School in 1963. She was a member of Job’s Daughters and elected to serve as Honored Queen at Bethel Number 22.
Over the course of her life, she worked as a contract specialist supervisor for the Social Security Administration and as a member of the front-desk staff at Howard County General Hospital. She had a passion for gardening, soaking up the sun on the beach at Ocean City, and all things related to England.

In December 1991, Maria married the love of her life, Alan Prevost, with whom she enjoyed twenty-five years of marriage. Alan preceded her in death in February 2017.