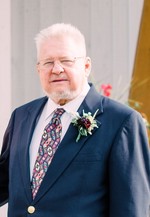 Joseph F. Tieperman, Jr., a Rouse Co. financial officer who helped create Columbia in the 1960s, died January 11 at Frederick Memorial Hospital from complications from pneumonia. He was 78.

Joseph F. Tieperman was born in Baltimore and raised in Towson. He attended Immaculate Heart of Mary Grade School and Towson Catholic High School, and earned a bachelor’s degree from the old Baltimore Junior College, where he met his future wife, Leslie (Abbott) Tieperman, a school teacher.
He and his family were early residents of Columbia. In the late 60s they were among the first families to live in Longfellow.

When diagnosed with cardiomyopathy in 1988, his wife received the 52nd heart transplant performed at Johns Hopkins Hospital, and was cared for by her husband and children until her death in 2008.
Mr. Tieperman was an avid sports fan and an original PSL ticket holder for the Baltimore Ravens.

A Mass of Christian burial will be offered Monday January 20th, 10 a.m., at St. Louis Roman Catholic Church in Clarksville.

Mr. Tieperman is survived by two sons, Parker Tieperman of Columbia and Lance Tieperman of Essex; two daughters, Holly Sneeringer of Catonsville and Brooke Talbot of Columbia; a sister, Barbara Hogue, of Martinsburg, WVA., a brother, Richard Tieperman of Frederick, and ten grandchildren.

In lieu of flowers memorial contributions in Mr. Tieperman's name may be directed to the Living Legacy Foundation of Maryland ( www.thellf.org/our-work/ )