To share your memory on the wall of Howard Harrison, III, sign in using one of the following options:

Provide comfort for the family by sending flowers or planting a tree in memory of Howard Harrison, III

Provide comfort for the family of Howard Harrison, III with a meaningful gesture of sympathy.

Buddy, as he was known by all, was born on April 11, 1941 to Geraldine C. (Bolger) and Howard E. Harrison, Jr. He had wonderful memories of his parents and family while growing up in Bradshaw, Maryland at The Belgian Village, the family business. The family moved to Ellicott City, MD in the early 50’s to a farm that would become The Enchanted Forest. The Enchanted Forest, a storybook land, was the vision of his grandfather, Howard E. Harrison, Sr. His parents, Howard “Buddy”, Jr. and Geraldine, “Jerry” moved the family to the property in Howard County where they worked to create and build the park, hand in hand with Howard, Sr.

Buddy was a graduate of Howard High School. His first career was in the printing industry. In 1968 his father, Howard Jr., asked him to join in the running of the family business. Buddy acted as President until The Enchanted Forest was sold in 1988.

Buddy was an entrepreneur who partnered in varied businesses. In 1975 he was a founding partner in Bucklew, Harrison & Associates, Inc. an advertising agency. In the late ‘70’s he was a member of the original partnership which brought cable television to Howard County.

In the early ‘80’s Buddy dabbled in the restaurant business as a partner in The Eager House in Baltimore. The partnership took the building from disrepair and returned it to a beautiful fine dining restaurant.

Buddy loved boating and in 1986 he was an original partner in the development of Goose Harbor Marina, a full service 200 slip marina on the Chesapeake Bay in Middle River. In 1995 Buddy and Kathie joined a partnership which purchased a farm on the eastern shore of Maryland. Together with their partners they built Murphy John’s Inc., a wholesale nursery and greenhouse business in Sudlersville, MD. In 2000, Buddy and Kathie moved to Millington, MD after Buddy designed and built their home.

In 1992 Buddy was one of a seven-partner group, 108 Limited Partnership, that purchased 45 acres in Clarkesville, MD. There they developed The Howard County Auto Sales Park which opened in 1996.

Buddy had a larger than life personality and he commanded a room. He was a loyal friend and a confidant to many. He was kind to everyone he met and he loved to hear people’s stories. He was a trusted advisor to many and was generous in spirit and deed.

In business he was driven and focused. To his family he was a fierce protector, a huge prankster, a thoughtful and loving man and a true gentleman. He was our rock and adored by each of us. We will miss his laughter and his smile, his guidance, his hugs and the love and pride that showed in his eyes when he looked at each of us.

Receive notifications about information and event scheduling for Howard

There are no events scheduled. You can still show your support by sending flowers directly to the family, or planting a memorial tree in memory of Howard E. "Buddy" Harrison, III.
Plant a Tree

We encourage you to share your most beloved memories of Howard here, so that the family and other loved ones can always see it. You can upload cherished photographs, or share your favorite stories, and can even comment on those shared by others.

Posted May 21, 2020 at 10:42pm
I have so many wonderful memories of Buddy and it is still hard to believe I am writing about them on a memory wall. I have known Buddy for more than 50 years now. He was my first "big boss" at the Enchanted Forest and I still remember his commanding presence...yes, sometimes a tad intimidating! I learned quickly that he was a very smart man, the ultimate gentleman, and a someone that I could respect, trust, and look up to...and I always did. How blessed our family was when he married our precious Kathie! We had so much fun at family gatherings and he never let us down with his teasing and entertainment. He was there for me in good times and bad, always ready with advice and guidance when I asked, and even when I didn't ask...because he cared that much (and heaven knows I needed a lot of guidance over the years). He was kind, caring and loving...his love for family was so deep and natural, and evident even into his last days despite his sadly tormented mind. It was a beautiful thing to know that love was never ending. I am forever grateful and thankful for the blessing of you in my life, dear "brother" Buddy; and what means more to me than anything, is the endless love you had for our precious Kathie. Rest in peace...and until we meet again...I love you, Maur
Comment Share
Share via:
HS

Posted May 19, 2020 at 07:37pm
Buddy was such a warm and welcoming gentleman. From the moment I first met him, he received me as though we were long, lost friends. Always quick with a smile and a warm embrace or handshake, he always made me feel special. I looked forward to visiting him and Kathie because they were both so generous with their love and hospitality. We will certainly miss him, but we can take solace in the knowledge that he is watching from above, smiling with pride in knowing of the many lives he touched and the closely bound extended family of which he was such an essential part. God bless you, Buddy. God be with Kathie and those of us who will cherish our memories. 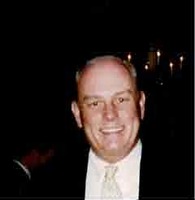 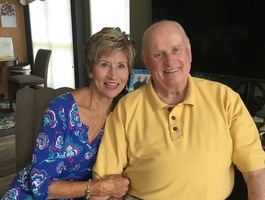 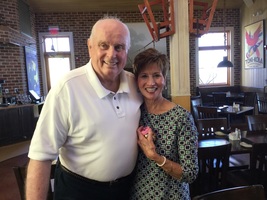 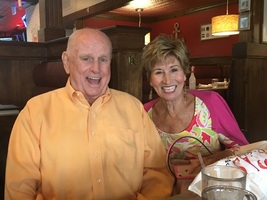