To share your memory on the wall of Hilda Ferguson, sign in using one of the following options:

Print
Hilda Marie (Beall) Ferguson passed peacefully, October 1, 2020 in Pikesville, MD. She was 91. Born July 22, 1929 in Howard Co., MD to Wilbur James and Elsie Mae (Teal) Beall who both preceded her in death.

She was a lifelong resident ... Read More
Hilda Marie (Beall) Ferguson passed peacefully, October 1, 2020 in Pikesville, MD. She was 91. Born July 22, 1929 in Howard Co., MD to Wilbur James and Elsie Mae (Teal) Beall who both preceded her in death.

She was a lifelong resident of Ellicott City and communicant at St. Paul Catholic Church in Ellicott City. She was preceded in death by her husband Dennis D. Ferguson, her son, Dennis E. Ferguson and her sister Dorothy Whiteford. She is survived by her sons, David Lee Ferguson and his wife Katherine “Katie” of Sevierville, TN., and Michael D. Ferguson of Ellicott City, MD., daughter-in-law Margaret “Peggy” Ferguson of Easton, MD., grandchildren, Shaun Roach of Littlestown, PA., Sheila Bouloubassis and her husband Michael of Kingsville, MD., Ian Ferguson and his wife Maggie of Federalsburg, MD., and Colin Ferguson of Germantown, MD, 9 great grandchildren, many nieces, nephews and other relatives and friends. Mrs. Ferguson is also survived by her special niece and goddaughter, Sandy Teal MacKenzie and her husband Bill.

Receive notifications about information and event scheduling for Hilda

We encourage you to share your most beloved memories of Hilda here, so that the family and other loved ones can always see it. You can upload cherished photographs, or share your favorite stories, and can even comment on those shared by others.

Posted Oct 02, 2020 at 11:01pm
Ms Hilda was a very sweet lady and friend to my mom and I. We would go out to dinner with her and Micheal and she would alway have a kind word or make you laugh. So sorry for your loss.
Comment Share
Share via:
M

Thank you Sharon. Mom enjoyed our dinner get togethers very much. 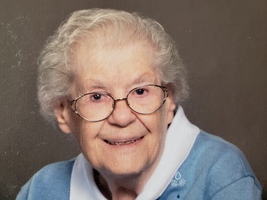