In Memory of
Graham Paul
Banks
1952 - 2018
Click above to light a memorial candle.
Memorial Candle Tribute From
Frontrunner Professional
"The lighting of a Memorial Candle allows visitors to leave a symbolic gesture of"
View full message >>>
Plant a Tree In Memory of Your Loved One
Click Here
Menu

In the event that there is an error
in the information presented,
please contact the funeral
home by clicking here. 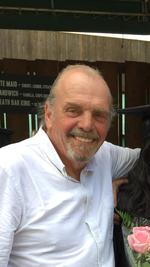 He was born in Portsmouth, England in 1952, son of Ronald and Joyce Banks. He served an apprenticeship in tool and die making, then ran his own small company in England before starting his work for Hayles and Howe, Ltd as an ornamental plaster and craftsman in 1984 where he worked on various projects in Europe and the Middle East.

In 1989, he came to the United States with a team of English workers. After meeting his wife, Susan shortly afterward he settled in the United States, where he was instrumental in setting up the American arm of Hayles and Howe. In 1990, he was appointed Vice President of Operations among the projects he directed were Postal Square Museum, Hippodrome Theater, and Union Station Washington, D.C.

For the last five years, he was part of Legion Motorcycle Club where he participated in their charitable drives for Travis Manion and the Leukemia and Lymphoma Society among others.

Provide comfort for the family by planting a tree in memory of Graham Paul Banks, please visit our Heartfelt Sympathies Store.