To share your memory on the wall of Gloria Stoesser Herrick, sign in using one of the following options:

Gloria was the matriarch of a large and close family. She was a loving and intelligent woman with a wonderful sense of humor. Her family appreciated her affectionate interest in their lives and her forthright advice when she felt it was needed. They all gathered recently to celebrate her 99th birthday.

Gloria graduated from Rutherford (NJ) High School and attended secretarial school in New York City where she worked for the secretarial school from which she had graduated. After marrying at almost 19, she continued to work until she and her husband Ed started their family of five children. Their home was full of fun, laughter, and good food. Her husband’s brother, Robbie, a bachelor and local schoolteacher also lived with them. It was always a favorite hangout of friends and extended family. Ed traveled for his job, and Gloria became a jack-of-all-trades able to do repairs, wire lamps, etc. She found time to be president of the local PTA, volunteer for the Red Cross drives, work for the Epilepsy Foundation, etc.

Gloria was widowed at 48 when her husband died of a heart attack. With young children still at home, she returned to the work force to support them. She worked as the office manager in a doctor’s office while she cared for her youngest son who was disabled in an auto accident.

In 1991, she, her second husband, Tom, and her son, Ed, moved to Columbia, MD, to be near her daughter, Jean and her family; and her son, Robert, and his family. They lived in the Village of Hickory Ridge until she was again widowed and Eddie became quite ill. They then moved in with daughter, Jean. Eddie died in 2012. Gloria remained there until her death.

Gloria’s strength, both physical and emotional, has been an inspiration to all who knew her. Her daughters often hear from friends and acquaintances that she was the best person they ever knew. She had two mottos: “The measure of a person is their ability to be kind;” and “We were put on this earth to take care of one another.”

We encourage you to share your most beloved memories of Gloria here, so that the family and other loved ones can always see it. You can upload cherished photographs, or share your favorite stories, and can even comment on those shared by others.

Sentiments of Serenity Spray was purchased for the family of Gloria Stoesser Herrick. 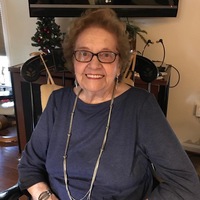 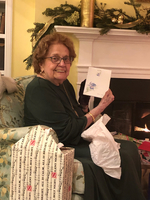