To share your memory on the wall of Gloria McKibben, sign in using one of the following options:

Provide comfort for the family of Gloria McKibben with a meaningful gesture of sympathy.

Print
Gloria Jean McKibben ,71 of Westminster, went home to be with her Lord and Savior suddenly on December 11, 2018.

She was born January 6, 1947 in Maryland. She was the daughter of the late Hattie Wilder and Elmer Cornwell. She was the s... Read More
Gloria Jean McKibben ,71 of Westminster, went home to be with her Lord and Savior suddenly on December 11, 2018.

She is survived by her son Charles Hook and his wife Angel Hook, her daughter Roxanne Puga and her husband Ralph Puga a James McKibben and his wife Tina McKibben. She has seven grandchildren Danielle, Charles, Randie Cheyenne, Amanda Michael and Matthew. She also has two great grandchildren Dawson and Mason. In addition, Gloria’s brother, Elmer Cornwell and his wife Nicki Cornwell.

We encourage you to share your most beloved memories of Gloria here, so that the family and other loved ones can always see it. You can upload cherished photographs, or share your favorite stories, and can even comment on those shared by others.

Posted Jan 11, 2019 at 10:51pm
I’m not good at saying goodbye to family but Jeannie was my family. I know she’s in heaven with Kathy and aunt Hatmae laughing and hugging. I miss them all so much and hope to see them soon. 🤧 my prayers are with Rocky and Charlie in this terrible time.
Comment Share
Share via:
MJ

Posted Dec 15, 2018 at 02:11pm
May God's love console the families hearts during this time of sadness. She is with God now, a new being, free of pain and sadness and in God's time you will be reunited
Comment Share
Share via: 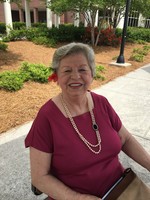