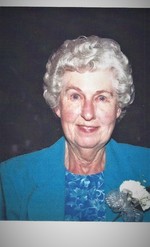 Mrs. Eloise W. Secrest passed away peacefully on August 6, 2019 at the age of 96. At the time of her death Mrs. Secrest lived in Pinehurst, North Carolina where she had resided for the last five years. Prior to moving to North Carolina, Eloise lived in the area now known as Columbia, Maryland for over 60 years. She was a long-time member of Emory Methodist Church in Ellicott City, Maryland.

Eloise was born in Belmont, Ohio on September 27, 1922 to Alger and Elva White. She was preceded in death by her husband, Carl E Secrest, who died in 1976, and by her two brothers and two sisters. She is survived by her children, Gary W. Secrest and his wife Joan S. Secrest and Carol S. Anderson and her husband Larry Anderson all of Pinehurst, North Carolina. She was a wonderful grandmother to her three grandchildren: Gary W. Secrest, Jr, John R. Secrest and Kristie Scott and her three great-grandchildren: Brittany Secrest, Wyatt Scott and Jack Scott.

In addition to being a wife, mother and homemaker, Eloise worked for many years for the Howard County Board of Education. She was always known for her independent nature and her hard work ethic. At her home in Columbia, MD she lived quietly by herself and continued to maintain her home and perform all the outdoor chores including mowing her own large yard until she was 86 years old. She loved playing games but hated losing. She was an avid cross-word puzzle fan completing the puzzle in the local newspaper every day in addition to the many puzzle books she was given by her children. Later in life she also took up Sudoku and became a very accomplished solver. She was also an accomplished crafter including crochet, quilting and later in life plastic canvas artwork. For her entire adult life, she continued to do all of her own accounting and income taxes faithfully filling her quarterly estimates 30 days early each quarter.