To share your memory on the wall of Dr. Graham Allan,, sign in using one of the following options:

Provide comfort for the family by sending flowers or planting a tree in memory of Dr. Graham Allan,

Provide comfort for the family by sending flowers or planting a tree in memory of Dr. Graham Allan,

From 1977-1988, Graham earned his Physics degrees, BsC and Doctorate, from Heriot-Watt University, in Edinburgh, Scotland. He went to France and worked at Laboratories National des Champs Magnetiques Intense (High Magnetic Field Lab) in Grenoble. Graham liked to say, “I worked in France for one skiing season!”

While in Iowa City, he met Tanya Hoegh, a music teacher in the area. They went sailing on their first date. Graham would say, “The wind across a sail works exactly like air across an airplane wing. Just imagine the airplane wing, vertical. What he got in return, from Tanya, was a blank stare. Graham was a great educator, and Tanya learned all about that, over time.

They left Iowa, destined for the Land of Enchantment, in 1994. Graham accepted a Professor of Physics position at Highlands University, in Las Vegas, New Mexico. In his spare time, Graham leapt at the chance to help coach their nationally ranked men’s Rugby team.

In 1998, NASA called. Graham began employment with NASA Goddard Space Flight Center, in Greenbelt, Maryland. Specializing predominantly in nonlinear optics, semiconductor physics, remote sensing and laser characterization, he has over 100 scientific publications and three patents. Using LIDAR, some of his projects have included measuring polar ice caps, the water vapor on Mars and carbon dioxide in the atmosphere.

Graham was an energetic and adventurous soul. Favorite activities included Sailing, Ice Boating (sailing on a frozen lake!), Skiing, Hiking, Rugby, Diving, Drawing, Aeronautics and Photography. He was “Team Photographer” for the Columbia Jazz Band, in Columbia, Maryland. Tanya is a saxophone player in the group. Graham was an active member of the Cape St. Claire Yacht Club. He raced every Wednesday and Friday night on the Magothy. When there was an opportunity to race on the Chesapeake, he and his crew would be there.

Graham was a perfect blend of intellect, adventure and wit.

Graham was cremated and A Celebration of his life is being planned for a later date. In lieu of flowers memorial contributions in Dr. Allan's name may be directed to the American Cancer Society (www.cancer.org) or to the Columbia Jazz Band (www.columbiajazzband.org)(please specify Columbia Jazz Band)

The family wishes to encourage the continued sharing of stories and memories of Graham’s life. They have given them joy during this difficult time.
Read Less

Receive notifications about information and event scheduling for Dr. Graham

There are no events scheduled. You can still show your support by sending flowers directly to the family, or planting a memorial tree in memory of Dr. Graham Robert Allan, PhD.
Plant a Tree

We encourage you to share your most beloved memories of Dr. Graham here, so that the family and other loved ones can always see it. You can upload cherished photographs, or share your favorite stories, and can even comment on those shared by others.

Posted Jun 15, 2020 at 09:38pm
I will miss seeing Graham out on the water and miss his great sense of humor. I always looked forward to any gathering that he and Tanya were attending. Especially because Trish and I could easily talk Graham into wearing our favorite...the black leather pants and red suede boots. No one could pull that off with such style the way Graham did. I always felt comfortable even in gale force winds and rounding a mark within inches of the rail of another racer only because i knew Graham was at the helm. I feel so fortunate to have so many wonderful memories that involve one of the most amazing and humble people I've ever known. Lastly, Thank you for coaching me on how to pronounce Edin"butter" before I visited Scotland. I will miss you dearly and will always be here for Tanya. 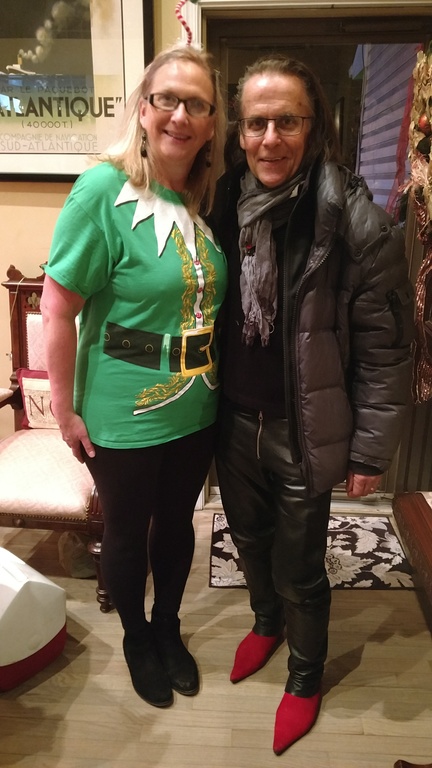 Posted Jun 15, 2020 at 02:51pm
Tanya... I've been in a state of shock - I've no words adequate to express my sorrow and condolences. Graham was funny, brilliant, complex...and humble. The world lost a truly amazing person. That doesn't even cover it.
Sir Jackie Stewart, or Niki Lauda..? The question would get a smirk..and his smile.
My deepest condolences...

Posted Jun 02, 2020 at 11:04pm
Tanya, I am so sorry for your loss. Graham was always willing to lend a hand. I remember a few blizzards where he would be shoveling next to anyone who needed extra help. I think once he even dug out my car so I could go to work after the plow blocked me in. I'm glad he's no longer suffering, but he will be missed. --- Jackie Brown
Comment Share
Share via:
BF

Posted Jun 02, 2020 at 09:45pm
When Graham wasn't sailing, he always had a camera in his hands. I had the joy of traveling with Graham to many beautiful places and we often ended up in each others pictures. Here are two memorable times where we found ourselves on photo adventures. Precariously perched on the summit of Zugspitze (Germany's highest peak) and seeking out particularly interesting (and photogenic) pigeons in Perujia, Italy. I cherish our friendship. 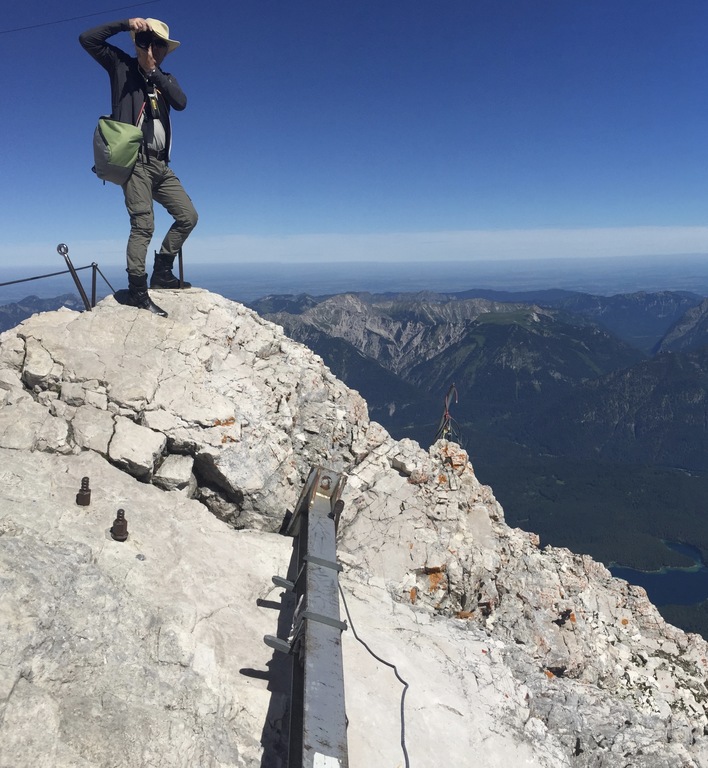 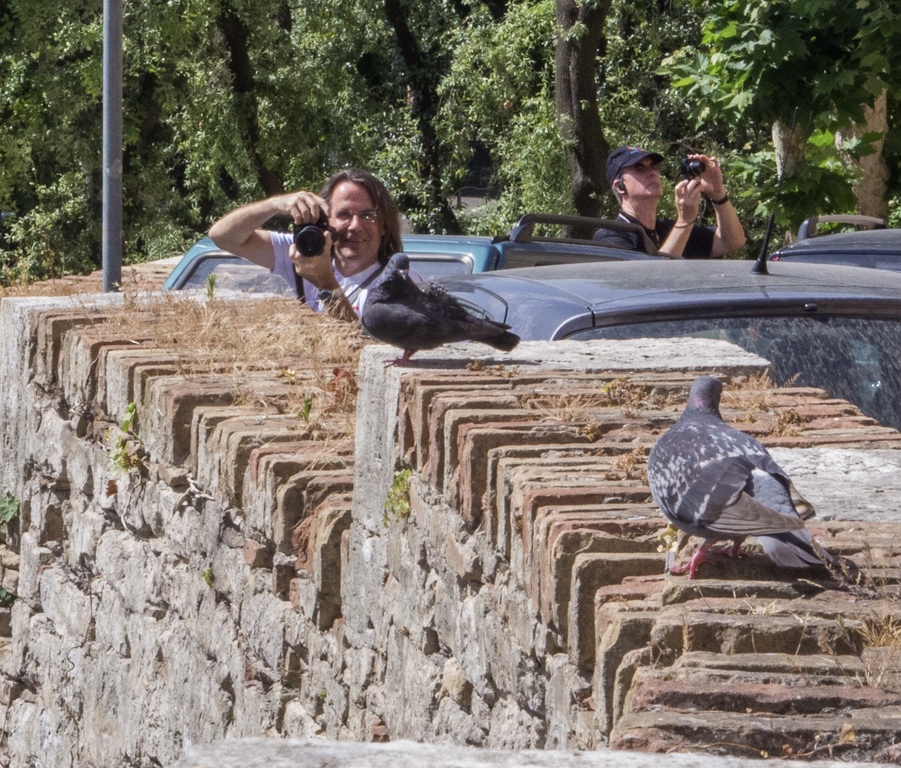 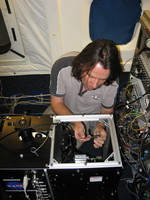 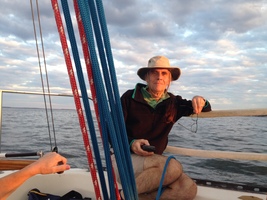 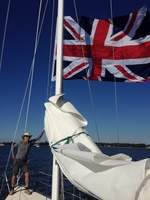 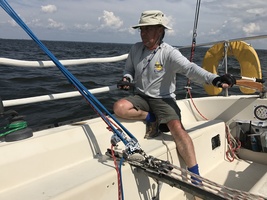