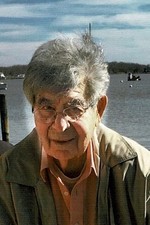 Before retiring in 2002, Mr. Tartanian worked for over 30 years at the Naval Research Laboratory as an electrical engineer. He also worked as a part-time realtor for many years. Prior to moving to Maryland, he worked for General Electric in upstate New York. During that time, he designed and developed optical imaging equipment that was used on the Gemini space missions and was awarded two patents. He was an honored member of IEEE and Tau Beta Pi. He earned a Master's degree from Cornell University and Bachelor's degrees from Columbia University and Brooklyn Polytechnical College. He graduated from Stuyvesant High School in New York. He was known for his keen sense of humor and his love of trout fishing in the Catskills. As a son of Armenian immigrants, he was proud of his Armenian heritage and supported Armenian charities.

A memorial service is being planned for a later date. Please see www.slackfuneralhome.com for online condolences and further information.